It’s been about one month since we began making  adjustments using the results of the Glacier Peak Holistic Alternate Sensitivity Test as a guide. If you’re just joining this journey, you can read about the first few steps in earlier test articles.

Much as I’d like to be able to report immediate, jaw-dropping improvement, the changes we’ve made to date have been small, and the results reflect that. 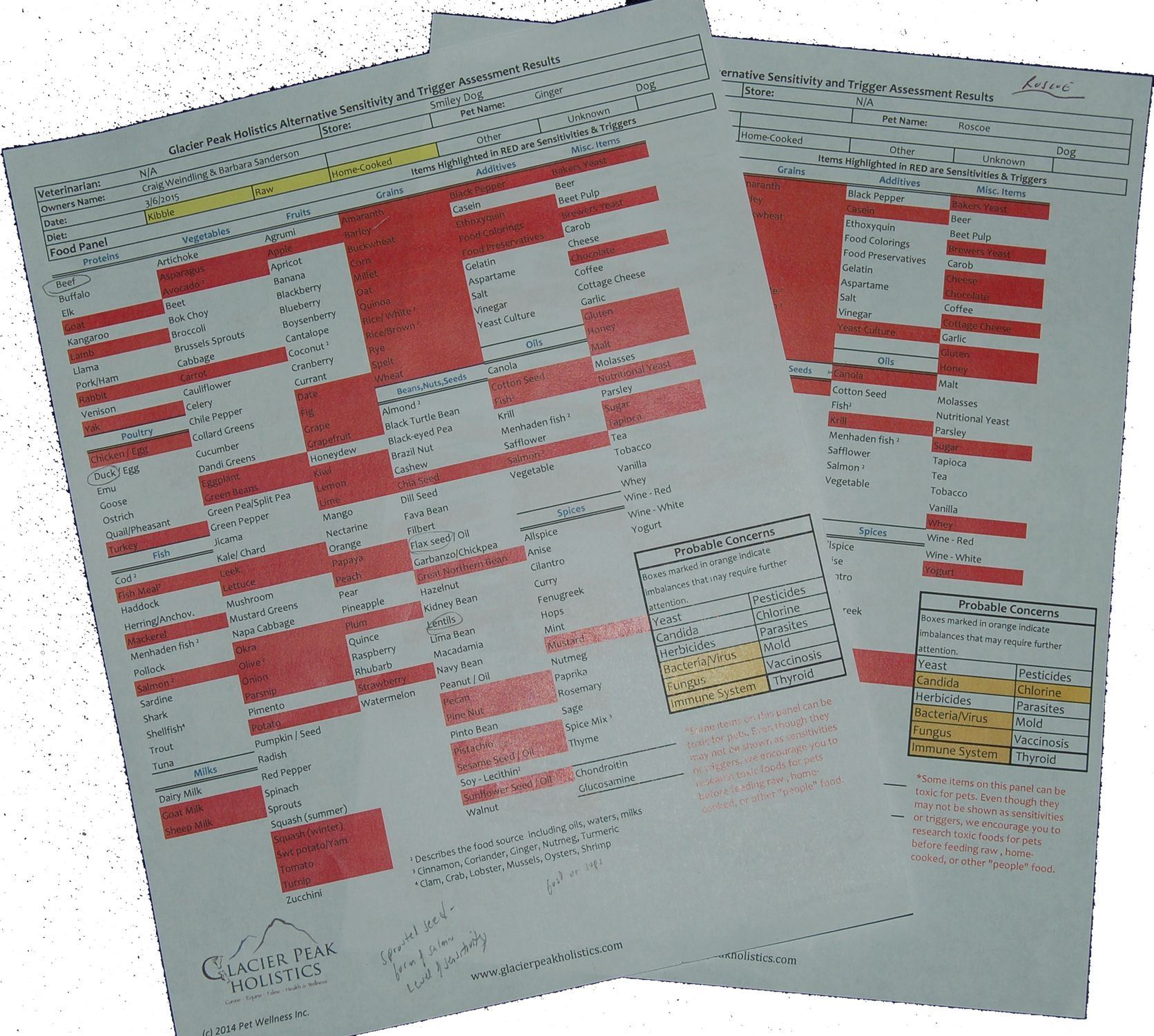 This is not to say the test is a disappointment

I would expect to see a more dramatic improvement if both test subjects had immediately jettisoned all potential triggers that the test identified. Instead, both Ginger and Roscoe’s food regimen has been tweaked slightly, and Roscoe’s home environment has also seen some adjustments.

Ginger has been slowly moving away from the identified protein triggers in her daily meals and treats. Her diet initially eliminated about 60% of what was identified on the test.

Potential protein triggers in raw, home prepared or canned portions of meals have been replaced, with the exception of Sweet Potato. A small portion of Chicken remained in her diet from 1/4 cup of Carna4 Chicken kibble daily for another few weeks.

Her daily antihistamine has been eliminated and replaced with Daily Defense. This was begun following a 3 week protocol of GP Gold and Peak Immune.

Roscoe’s test did not identify potential protein triggers in his current food. Roscoe’s food does contain 3 potential triggers in Sweet Potato, Potatoes, and Canola Oil. Adjustments were made to his treats and snacks.

The irony of using cheese and bread as a delivery aid for daily meds was made clear when cheese and gluten were identified as triggers for Roscoe. Identifying grains and gluten as triggers has led to new gluten-free treats.

The other major change for Roscoe is that there is less dry cleaning done in the household and it is now kept behind closed doors of a closet. This appears to have made a significant improvement.

So what are we seeing now?

For Ginger, the changes have been subtle. I did notice an improvement in her coat when the supplements were started. Her itching has not completely disappeared, nor has it significantly gotten worse. I had hoped to see it disappear entirely, and perhaps that will happen given more time and with the elimination of the final portion of trigger elements in her diet.

For Roscoe things have been a bit different. After first making the changes, Roscoe’s eye-tearing was greatly improved. With the change of seasons, however, his itching returned. Roscoe’s vet found the test results “interesting” and  prescribed a one- week course of antibiotics and 2 weeks of steroids.

Given the limited success that Ginger has had with replacing antihistamine with natural remedies, I’m hoping Roscoe can benefit from a similar result.

Will Roscoe return to antihistamines?

We’ve talked about having a phone consultation with Glacier Peak Holistics concerning Roscoe’s situation once the 2 week course of steroids ends. My hope is that with a targeted approach using the GPH supplements, he will be able to get past this ongoing issue rather than continuing to suppress the symptoms.

Yes, this will require a bit more effort and most likely cost more than continuing a daily dose of antihistamine. I do believe it would have a much better result over time, and Roscoe would end up healthier and with a strengthened immune system.

Whichever approach is followed, Jackie feels that the test was well worth doing for the knowledge it gave her. It was “super easy” to do and very cost-effective. After having spent more than $1000 on vet visits and allergy tests, she was surprised to see a similar result with more information from a test costing under $100. A bonus for her was that it was not invasive or painful for Roscoe.

I’m encouraged by both of our results, but still want more

In an ideal world, we both would have followed the test results to the letter, eliminating all potential triggers. Then we’d begin the recommended regimen of supplements and both Ginger and Roscoe would be problem free.

We’re slowly following parts of that path, with detours along the way. How far along we each get will be determined as the journey continues. Whatever the result, we invite your questions and will gladly share the results.

I’m still hoping for an undeniable, marked improvement in Ginger’s occasional itchies. Jackie now enjoys knowing that Roscoe is not allergic to her, but only to her dry cleaning. Despite considering a return to a daily antihistamine, she thinks everyone should do the test because of the identifying knowledge it brings.

As she commented at the end of our last conversation, “how do you treat something if you don’t know what you’re treating?”

Read the final report on this experiment