You are here: Home / News / Signs Around Town

Our local elections have come and gone and it won’t be long now before things begin heating up for the 2018 mid-terms. Some might say they’re already percolating in earnest.

Every couple of years as elections come and go, it’s been interesting to watch as different crops of yard signs spring up and then disappear.

Along with the opportunity to enjoy watching dogs frolicking in off-leash areas or being walked through their neighborhoods, “signspotting” is one of the simple joys that comes along with daily deliveries.

I suppose observing these signs helps pass the time while waiting in traffic.

Along with the variety of dogs being walked along the sidewalk, signs offer an ever-changing indication of the neighborhood sentiment. 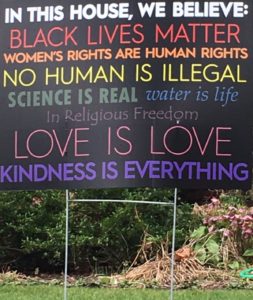 Early this year, a new type of sign began sprouting up

They weren’t exactly election signs, but certainly were making a political statement. It began with a glimpse of something unfamiliar. Rounding the next block revealed a few more of the same.

These signs resonated more than generic election signs or political statements. They reflected a strong sentiment in response to the new landscape in the nation’s capital as changes began to become apparent.

Over the next few weeks, that sign appeared to spawn some offshoots. Similar, but different, the statement being made was sprouting up in neighborhoods from Everett to Beacon Hill.

There was even a very small statement being made on the rear bumper of a car. If you squint, perhaps you can make out what it says. 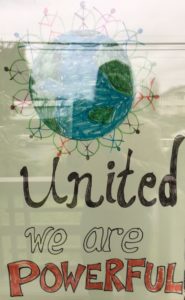 This one was different. It appeared in a window on a piece of paper with ragged edges, seemingly torn from a drawing tablet. Was it a school project, or the result of conversations at home? 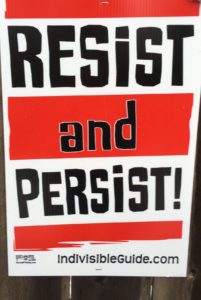 After months of seeing these signs on walls and fences, in windows and yards, they still bring a smile which we’d like to share. I’m thankful, and proud, to live in a community that appears mostly united in hope, decency, and respect.

We’ll continue to add more photos to this post, and you’re invited to send us your favorites as you discover them around town.

I hope they make you smile as well. 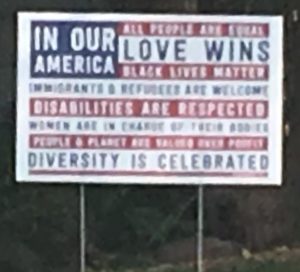 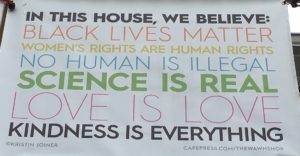 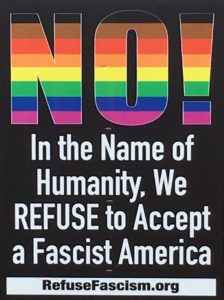