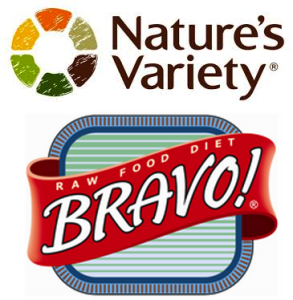 The FDA and some state’s Department of Agriculture have been conducting a campaign to test raw pet foods for contamination. In the past few weeks, a number of foods have issued recalls as a result.

The latest foods to be caught up in this campaign are selected products from Nature’s Variety and Bravo. The specifics of each recall are listed below.

A different standard is being applied to raw pet food than is used with food for human consumption. Surprisingly, the standards applied to pet food are stricter than those used for our own food in these cases.

The reasoning behind this is simple. Higher levels of bacteria is found in meats sold for human consumption. This higher level of contamination is acceptable in human foods because cooking kills the pathogens prior to consumption.

With raw food, any bacteria found in the meat is handled by your pets’ digestive system

This bacteria rarely poses a threat to your pet since their digestive system is designed to handle it quite differently than our own. The challenge comes for us, since the same care must be taken when handling raw pet food that is exercised when preparing raw meat for our own table.

It is this potential problem that is driving the recent set of recalls. Additional processing is required to ensure no bacteria remains in the raw pet food to eliminate any danger to pet parents. As a result, we can expect to see ongoing recalls for listeria and salmonella in raw pet foods over the coming months.

The following lot of Bravo Blend Chicken for dogs and cats tested positive for Salmonella and was recalled.

Additional products were also recalled because they were produced in the same location on the same day as the affected lot above. These products did NOT test positive for Salmonella, but are being recalled as a precaution:

You can read the Bravo recall notice on the company’s website.

You can read the Nature’s Variety recall notice on the company’s website.