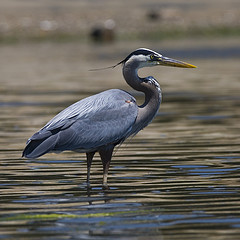 Want to read a feel good story about a client saving the life of a defenseless bird in Meadowbrook Park this weekend?

Look no further than this story that ran yesterday in the Seattle Times. Stephen Johnson was shooting photos in the park when heard a gunshot and saw a heron fall from a tree. The shot came from a group of individuals he had recently confronted about carrying a gun in the park.

The group fled, but police were able to find them following a call to 911 that Stephen placed after the shooting. He was then able to identify the individuals, who were arrested, and the gun found at a residence where it had been hidden.

The heron was recovered after Stephen returned to the park and phoned a friend who arrived with a canoe. The injured heron had escaped capture following the shooting by swimming to a small island . It is now at PAWS being treated.

Congratulations to Stephen’s quick thinking and willingness to do the right thing!